Initially I saw a blue collar, space trucker type game. A game that could allow you to find out what the crew of Extraterrestrial could have done for the job, before the Xenomorph started picking them up on the Nostromo.

Watching the trailer, and combining that with its genre being described as “action-adventure simulator”, I still wasn’t quite sure what to expect. I can honestly say that I didn’t expect a highly addictive and incredibly satisfying job simulator.

It’s not much but it’s honest work 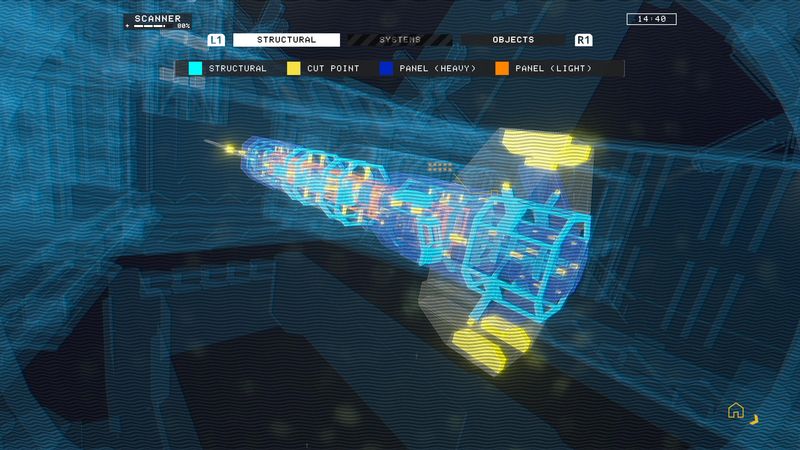 In Hardspace: Shipbreaker, you play as a “Cutter”, which is also referred to as such throughout the game. A silent protagonist who works for a company called LYNX.

The main objective of the game is to dismantle spaceships into their smallest parts and sort them into the incinerator, or processor, which are located on either side of the salvage bay. The most expensive parts often have to be placed in the barge below.

The Salvage Bay is located outside of Earth’s orbit in space, which means you’ll be stripping these ships of their parts in zero gravity.

Although the game looks pretty ordinary, what follows is a very satisfying experience, one that requires patience and a methodical approach.

As a Slicer, you’ll be equipped with tools such as the Modular Laser Cutter, which allows you to cut certain points from the structure, or horizontally slice objects in order to split pieces into smaller, more manageable pieces.

Other tools include the Handheld Utility Grapple, which allows you to easily move certain objects around. There is also a cross spectrum scanner, which is a visualization tool, to help you plan your work.

Demolition Charges, which unlock a bit later, can be used to destroy the toughest sections of ships. 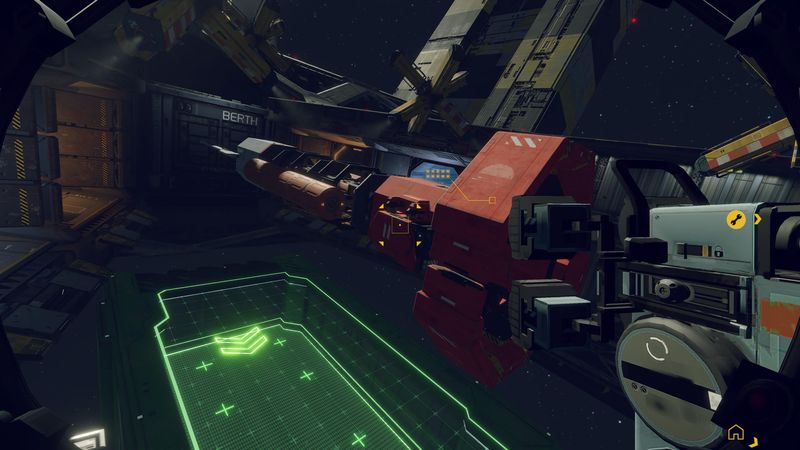 Floating in weightlessness, meticulously taking ships apart by finding their structural cut points, then sorting them into the right spot with the utility grappling hook, as you steadily break down the ship until nothing is left, is a hook of so addictive gameplay.

It’s a game you can play for hours on end, not realizing how much time has passed.

The ships themselves start out small and become progressively larger and/or more complex as you progress through the game. You’ll find yourself facing increasing danger ratings, which include hazards such as reactors.

Reactors will require you to plan an exit strategy, as once you remove it, you only have a few moments to move it to the barge, before it explodes.

Figuring out how to properly dispose of a reactor for the first time and accidentally sever a cooling pipe, causing an entire section of the ship to explode into pieces, makes for a fun organic moment.

Fun, until you at least have to clean up the floating rubble.

Hardspace: Shipbreaker feels like a puzzle game at times. There are also occasions where creativity is needed to be more effective. For example, using tethers to pull things out for you, so you can reach a fuel switch in time and avoid disaster. 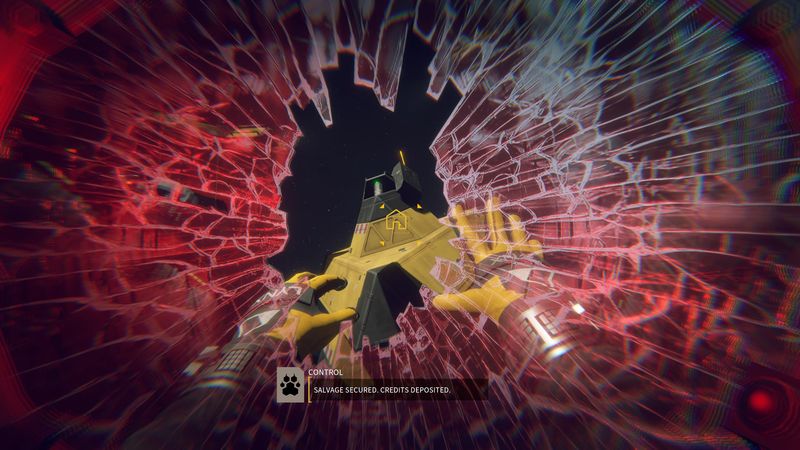 While working your blue-collar job, in a spaceship chop shop, you’ll need to keep an eye on your oxygen, thruster fuel, and the countdown to complete your shift. You can sometimes find oxygen and fuel canisters aboard ships.

However, it can also be purchased from a computer vendor, where you enter the recovery bay.

The salvage bay can be a dangerous place to work. You can damage your suit or even break your helmet, which will quickly deplete the oxygen.

There was a time when I was trying to rush in, finish before the deadline, and ended up retracting something with the utility grapple too fast, breaking the helmet glass, thus choking.

Although shocking, it created another great organic moment. If the damage is minor and you’re quick, you can find a Suit Repair Kit to fix yourself.

There are other dangers you’ll want to avoid, like exploding reactors, as mentioned earlier, or being dragged into the incinerator or processor. Certainly, when I started, it happened to me more than once. 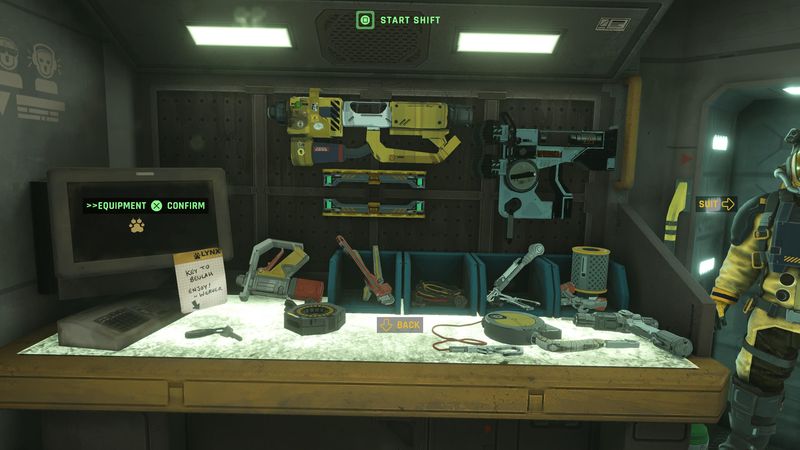 The main reason for sorting the dismantled parts of the ship into the incinerator, processor or barge is to earn money. Some parts are worth more than others, but the bulk of the ship will be needed to completely fill the meter at the top of the HUD.

The meter is divided into segments, which simultaneously show your profits and help you level up. Naturally, sorting out these dismantled ship parts incorrectly, or destroying them, will see the counter decrease and the potential profits decrease.

In Hardspace: Shipbreaker, the overriding goal for making a profit is to pay off a debt. A debt that the LYNX company has kindly contracted for you by embarking on the demolition of ships.

Other costs include resources you need like oxygen and the body you inhabit. Since the body is a platform, it also costs money, if you happen to expire at work.

Every shift will cost you money on top of that, so you want to manage your time and resources as best you can, as a way to maximize profits and pay off your $1 billion in debt credits.

All of these moving parts show what a well-designed experience Hardspace: Shipbreaker is, where every aspect plays into each other, further accentuating its addictive gameplay hook. 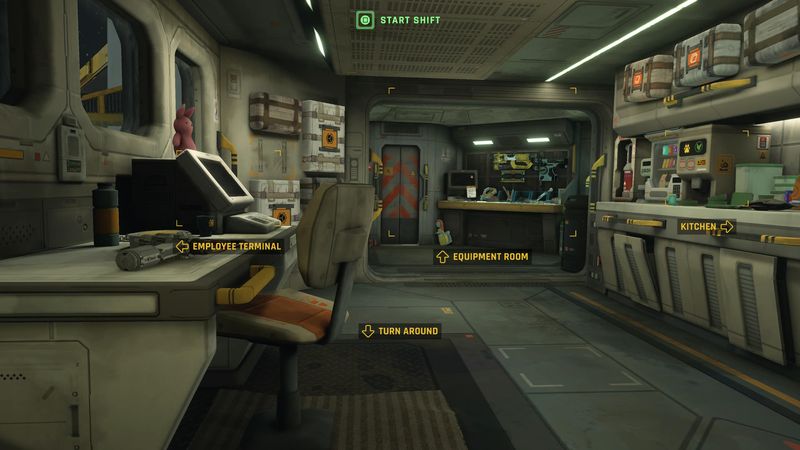 Between shifts, you will rest on site at the HAB. The HAB is a mini hub, which is basically a studio in outer space. It’s a place where you can read messages and decorate with posters you may have found during recovery. The HAB is also where you can upgrade your gear.

The HAB is not large enough to move freely like you would in the salvage yard. You select the part you want to interact with and that’s it. This is the part of the game where I wanted a little more.

It feels pretty limited, and it’s almost as if it’s designed to power the time management aspect of the game loop.

In the middle of the game, you will receive your own derelict spaceship, visible from the HAB. You’ll be tasked with collecting specific parts for this, from the ships you deconstruct during your day job.

However, you will not install the parts with your equipment. You just have to apply them on a computer screen and it will be done for you. 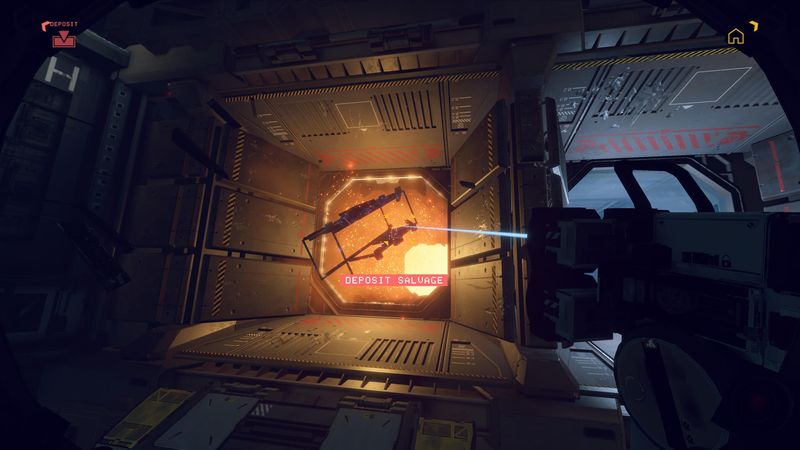 The lore that exists in Hardspace: Shipbreaker is mostly experienced in the HAB, reading on your computer or listening to audio messages. Radio conversations sometimes also take place at the start of each shift, which seems more natural.

The story that can be found in the game is quite intriguing, however. Your employer, LYNX, is a company that abuses and exploits its workers for profit. Hardspace: Shipbreaker explores things like unions, corporate propaganda, and capitalism’s insatiable hunger.

I certainly enjoyed exploring these topics and appreciate that these topics are brought to focus, especially in a working simulator. It’s a nice touch. It should also be noted that the game sometimes has a satirical approach, which gives it a certain charm.

Once you’ve completed the long task of paying off your debt, there are two more modes to explore outside of the main campaign. The “Weekly Race” which sees two players compete to save a weekly ship.

The other mode is called “Free Mode”, which allows players to start with unlimited resources and fully upgraded gear. These modes are good additions and provide some replay value. Beyond that there are difficulty settings, one of which has a permadeath option, if you’re looking for more of a challenge.

The soundtrack is suitably rather country. It’s similar to what you would hear in something like Firefly. It fits right in with the industrialized, blue-collar aesthetic that Blackbird Interactive was after. It’s also very necessary, because the game would be very quiet without it.

Graphically, the game captures the industrialized aesthetic of space truckers well. Planet Earth provides a beautiful backdrop as you laser cut your way through the equally industrial starships. The game taking place here means there isn’t a lot of variety.

Hardspace: Shipbreaker is a game that took me by surprise. It fulfilled my fantasy of working as a blue-collar worker, in a salvage yard, in space. Admittedly, a fantasy I didn’t know I had until I started playing this game, and I couldn’t let go.

Blackbird Interactive has crafted a highly addictive experience, with engaging story elements and workers’ rights at its heart. It’s a game that prides itself on its honest working days, and if you work hard enough, you could repay that debt.

Review code courtesy of the publisher.