The roots of the problem lie in medical thought and assumptions, the book argues, with marketing also being a major driver of prescription rates.

Starting the medication is the easy part, Fava shows; ending it often much more difficult. Yet prescribing for “unmet need” and “subthreshold” conditions has eclipsed an even and medically necessary focus on deprescribing for treatment to be completed safely. Without this counterbalance, large numbers of patients are effectively stranded, lacking the guidance, tools, and support to properly interrupt through slow, measured decline.

With one in six American adults currently prescribing psychiatric medications at least once a year, in 8 out of 10 for long-term use, and comparable or higher ratios reported in the UK and across Europe, the question How to safely end antidepressant treatment remains a pressing concern for the tens of millions of affected patients around the world. As Fava notes, “Addiction and the inability to stop taking antidepressants represent a major and silent health emergency that has not received the proper attention from national health services and research agencies around the world.” .

As with previous writings by Fava – among the first to seriously consider antidepressant withdrawal in clinical settings – his unwavering focus on the disease ensures that his investigation carries weight and requires careful consideration.

Fava is now Clinical Professor of Psychiatry at the University of Buffalo, New York. But in the early 1990s, he set up an Affective Disorders Program in northern Italy, bringing his psycho-pharmacological knowledge on his clinical experience, and the difficulties of his patients in withdrawing from SSRI and IRSN antidepressants to influence its therapeutic approach. The latter, he notes, quickly collided with a psychiatric context in which the two classes of antidepressants were championed as “solving” a withdrawal problem that previously plagued first-generation antidepressants such as tricyclics. As Fava writes of a story which also first captivated him, SSRI antidepressants were considered “potent remedies” for the treatment of depression and anxiety, the “chronicity” of drugs. drugs being largely redefined as “essentially a consequence of inadequate diagnosis and treatment”. 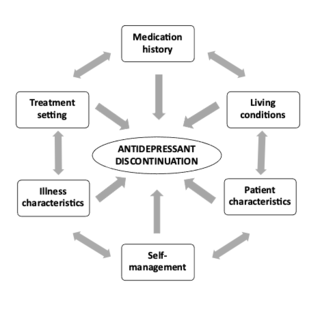 As we learn from the book, this dominant narrative – based on equally misleading claims about drugs correcting a “chemical imbalance” in a “broken brain” – was quickly called into question by clinical experience.

â€œIn the 1990s,â€ he writes, â€œa whole different picture emerged with the introduction of selective serotonin reuptake inhibitors (SSRIs). We began to experience withdrawal syndromes which followed with their reduction and cessation.

The first of these was, in Fava’s case, a “wake-up call.” An adult man trying to gradually reduce his antidepressant treatment as directed called him to warn him, â€œI can’t get another night this way. The patient was frankly “terrified” by the adverse events from which he was suffering, which included “severe dizziness, unsteadiness of gait, malaise, muscle pain and visual hallucinations”.

” What is happening here ? He asked of symptoms quite different from those that had caused him to seek help. Fava’s response is characteristic of her whole approach: â€œI felt that we had a moral and intellectual obligation to provide a response, whatever the personal costs.

The two-step sequencing program described in the book combines alert responsiveness to side effects with candid recognition of blind spots in scientific knowledge. This ties in with Fava asking questions like “What did I miss?” And “What will be the long-term outcome of their disruption?” “

In the 1990s and 2000s, he explains, referring to multiple early responses to quitting problems (preferred terminology at the time), the pharmaceutical industry systematically “urged to minimize the manifestations of withdrawal during stopping SSRIs and SNRIs. The business plan was to expand the[ir] use … from depression to other psychiatric disorders (especially anxiety disorders) and to prolong their administration as long as possible.

As Fava notes, the drugmakers have been “rather successful in minimizing these clinical events” – steps that in themselves “inflated” the overall effectiveness of the drugs from a “selective report of positive trials.” . Browsing through the literature for ‘medical aid and competence’ for his patients, Fava was’ struck by the fact that the available journals were characterized by a selective use of the literature, with a strong commercial bias (and indeed most authors had significant financial conflicts of interest). Among leading psychiatrists, the consensus at the time was that the symptoms that do resulting from discontinuation were “mild” and “self-correcting” after 1 to 2 weeks; the language and calendar have since taken years to update and correct.

The theme of selective reporting and inflated results is built into the book, leading to some of its strongest statements: “Because of their financial power and their close connection to each other,” Fava writes,

members of special interest groups can systematically prevent the dissemination of data that may conflict with their interests. Corporate powers have merged with academic medicine to create an unhealthy alliance that runs counter to objective reporting on clinical research, holds meetings and symposia with the specific purpose of selling participants to sponsors, and that Significantly controls journals, medical associations and associated foundations. (via direct support and / or advertising). Such phenomena operate in all branches of medicine, including psychiatry.

The narrative that surrounds antidepressants for medical students and intern psychiatrists in turn has an influence on their prescribing habits and decisions. Fava put that in an interview last year with Psychiatric schedules emphasizing: “If you teach a psychiatric resident that the symptoms that occur during withdrawal cannot be due to withdrawal, he / she is likely to interpret them as signs of relapse and to resume treatment (exactly what is needed). like “Big Pharma”). â€¦ These clinicians actually perceive a state of distress in their patients but have only learned to think in terms of harmless drugs. They often ignore the major advances of psychotherapy in recent decades, far superior to pharmacological advances.

In the book, these assumptions can seem so pervasive and overwhelming that they sometimes lead Fava to conclude that he is “swimming against the tide of pharmaceutical propaganda.”

Nonetheless, his insistence on tackling “long-term outcomes” for the drugs that psychiatrists and other physicians continue to prescribe in large numbers means that he is able to address pressing related issues such as: drug tolerance. drugs and the risk of a higher dosage; the mismatch between SSRIs and anxiety disorders; and why pharmacological interventions can “trigger cascade iatrogenesis” or multiple downstream adverse events, including emotional dullness and a syndrome now recognized as post-SSRI sexual dysfunction (PSSD).

Further, Fava calls the concept of “resistance to treatment” “ill-defined” and “questionable” because it is “based on the untested assumption that the treatment was right in the first place.” In the latter scenario, “the lack of response depends on the characteristics of the patients,” implicitly blaming them for the non-response while reaffirming that drug treatments are optimal and preferable when they may not be.

A more discreet and no less important argument throughout the book is that “biological reductionism has resulted in an idealistic approach, which is quite removed from the explanatory pluralism required by clinical practice”. The decision to reclassify â€œmildâ€ and â€œself-correctingâ€ what, in practice, are often long-term chronic withdrawal symptoms of medical origin can be seen as a key element of this â€œidealismâ€, in that sense. that he presents a story about SSRIs and SNRIs that are empirically at odds with clinical phenomena.

Fava’s book joins a group of new and important writings on prescribing and withdrawing antidepressants, the publication of which indicates a shared understanding of the magnitude of the problem. They include James Davies’ critique of psychiatric reasoning in Sedated: How Capitalism Created Our Mental Health Crisis (2021); Beverley Thomson’s patient-centered analysis in Antidepressant: A Revolutionary Review of Epidemic Antidepressant Damage and Addiction (2022); and that of Michael P. Hengartner Evidence-based prescribing of antidepressants: over-medicalization, flawed research and conflicts of interest (2022).

Of these, Hengartner’s emphasis on “economies of influence” undermining clinical trials and distorting the scientific profile of antidepressants is closest to that of Fava, particularly in his final chapter, “Solutions for reform â€, on how corporate biases affect medical research. Fava’s final chapter is titled â€œA Different Psychiatry is Possibleâ€ and it includes recommendations for macroanalysis and â€œiatrogenic thinkingâ€, for safer and individualized forms of treatment and reduction that also involve psychotherapy.

Overall, Fava’s book invites us to examine “the main health problems caused by inappropriate prescriptions of antidepressants” and their “very disappointing results.” In its concise and useful practical recommendations, Stopping antidepressant drugs is a book that is also astonished that, more than two decades after SSRIs and SNRIs were first approved, we “still have so little scientific information to process.” [their] key clinical issues â€, including those related to toxicity, addiction and withdrawal.